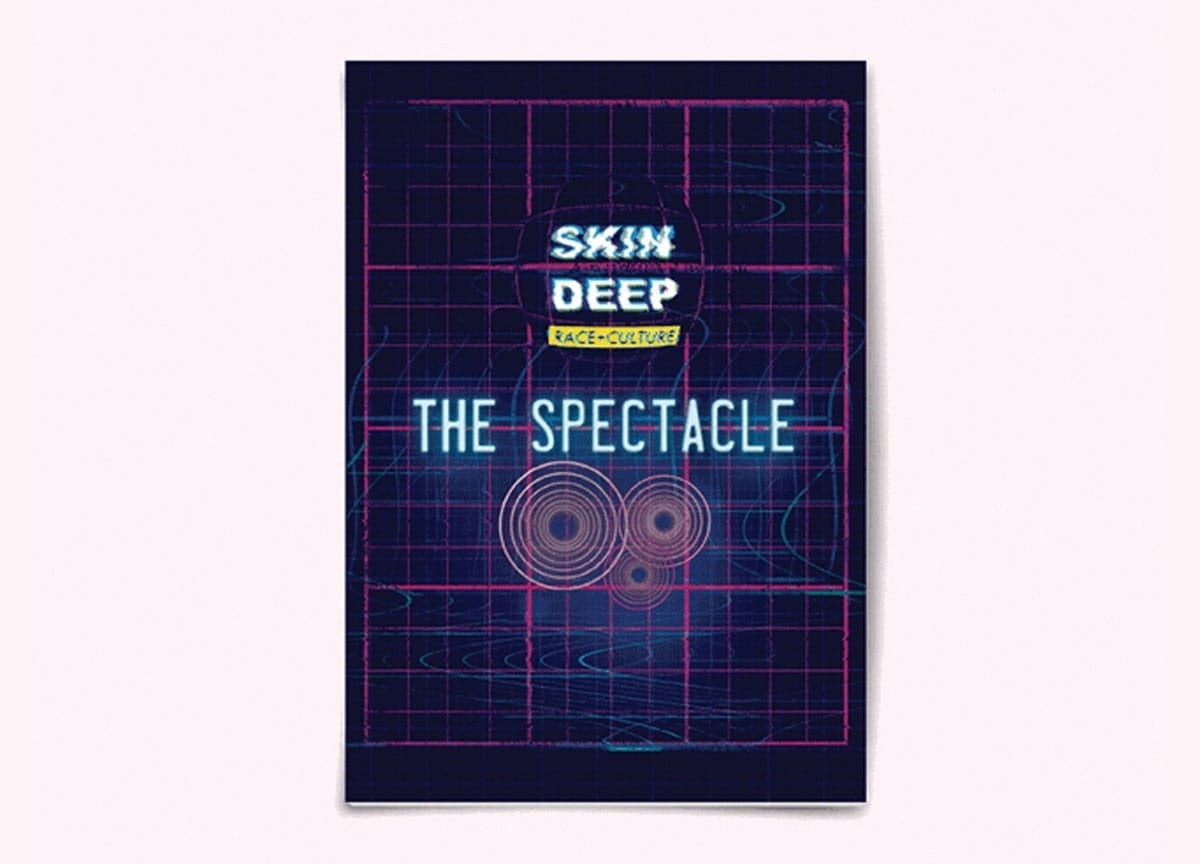 With a cover that seems to have surfaced from a dark, dystopian corner of the internet, Skin Deep magazine sets the tone for their issue. The London-based publication, which champions voices of colour through discussions on race, just launched their latest, and it’s packed with smart, fascinating and engaging writing on the phenomenon of the spectacle.

You’ll find quotes from Malcom X sitting alongside those of RuPaul’s; interviews with satirical cartoonist Khalid Alibaih feeding into an essay about the ephemeral impact of a viral tweet. By unpicking the sensationalism in mass media, the issue asks how people of colour writers, artists, activists can resist it or use it to their advantage. We spoke to editors Lina Abushouk and Anuradha Henriques to find out more.

🌚THE SPECTACLE 🌚 we're going to be at The Radical Book Fair tomorrow with @housmans_books come and say hi 👋 to us and check out our new issue 'The Spectacle' and our previous issue 'Imagining 2043' there! . . Come and chat with us from 12 to 6pm tomorrow at Goldsmiths! 📖 . . . . . . #magazine #fair #housmans #london #goldsmith #radicalbookfair #thespectacle #race #culture #online #print

Can you tell us about coming up with this issue’s theme, ‘The Spectacle?’
The idea for ‘The Spectacle’ came from Guy Debord’s seminal book ‘Society of the Spectacle’. Brexit had just happened, the United State’s presidential race was at its peak, and we were trying to make sense of everything that was going on. Debord described the ways in which images have come to dominate our mass media culture and become stand ins for actual content — so much so that our understanding of the world, our relations and the way we speak to each other is mediated and defined by the spectacle.

The medium that was of most interest as a group of twenty-something socially and politically engaged people was social media, because that is the primary way in which we consume news, engage with the world, formulate our subjectivity and articulate our political points of view. In the aftermath of Brexit, which was a shock to a lot of us, we wanted to reflect on how online spaces distort reality and in effect trap us in virtual echo chambers that give us a false sense of the political and social order. More importantly, we wanted to reflect on how online spaces offer up room for self actualisation and affirmation for people of colour in a way that the real world does not.

You wrote in the editor’s letter, “We want you to swim upstream, against the current of digital information.” It seems like print is the perfect medium for exploring the spectacle.
Print, as a medium, allows for distraction free reflection in a way that digital platforms and publications don’t. We wanted people to engage more IRL. Design wise, we did this by using the interfaces of various social media sites, such as Twitter, Facebook and Youtube, and imposing them onto a medium that is static and doesn’t allow you to scroll down or skip over content as easily. We also brought in physical and embodied ways of engagement by interviewing activists and asking them about the ways in which they (re)appropriate the spectacle and turn it into something useful.

Obviously, it’s through our website and social media that we’ve been able to connect with PoC communities and collectives across the world, from Jamaica to South Africa, India to Norway. So it’s about engaging with the complexities of a mixed media environment, and using the ones that will best help us achieve our goals: promoting anti-racist discourse and demanding the types of structural change(s) that seek to end racism.

How does Skin Deep offer unique perspectives to this dialogue of the spectacle?
When it comes to the politics of racial representation, the spectacle works to cast people of colour in roles such as criminals and terrorists, as a way to legitimise the ideology of the ruling order and to invalidate the demands for rights and inclusion that these communities are making. But the spectacle can and has been in the past be appropriated by movements that seek to resist and counteract the narratives they are being told. We wanted to ask: Can spectacle be used as a counter-attack by marginalised and oppressed people? Are we not also capable of creating images that change minds and galvanise movements? In a world filtered through screens, we decided it was time not to look through them, but at them.

What aspects of social media did you want to interrogate?
We wanted to ask our readers: What is it like to be a person of colour in the digital world, a terrain that has become (or perhaps always was) the home turf of the post-truthers, the alt-righters and the straight-up fascists? We wanted to explore how our black/brown-ness is conjured, performed and articulated in these virtual spaces. How do we keep track of what’s true when the lies that are told about us go viral?

Throughout the magazine you will find little pearls of wisdom offered by the likes of Cornel West, Arundhati Roy, and RuPaul, which helped us understand the spectacle. One of our favourites was from Malcolm X: “If you’re not careful, the newspapers will have you hating the people who are being oppressed, and loving the people who are doing the oppressing.” If newspapers were enough to have Malcolm X worried, imagine what he’d think about Twitter!

And Facebook!
Since waking up to a throbbing Brexit hangover, realising that slowly but surely Facebook had herded us into gated echo chambers, it’s clear that we need to marry technological development with ethics. In the issue, Saliym Cooper’s short story ‘Black’ imagines a virtual reality video game that allows white people to experience blackness, and exposes a twisted, idealising type of racism. Exploring themes similar to those in Jordan Peele’s film Get Out, but adding the dimension of technology, Cooper’s story perfectly sums up this disconnect between technological development and principles of equality, respect and human understanding.

What did you want readers to take away from this issue?
We want people to tune out the sensationalist discourse and to think about what these spaces and barriers of exclusion are actually doing. We wanted our readers to share in our interrogation of how these spaces criminalise vulnerable and marginalised populations without actually addressing the underlying circumstances. Border fences don’t keep desperate people out, but they do turn them into spectacles of illegality.

We also wanted to offer people contemporary examples of how they can get out and mobilise and resist. One interview in the magazine by our contributing editor A’Ishah Waheed, with three London-based women-led organisations (Sister Uncut, Women’s Museum, Movement for Justice by Any Means Necessary), looks at how protest can be used as a tactic to force change, and how the notion of spectacle can be weaponised in the fight against institutional oppression.

Grab yourself a copy or subscribe to Skin Deep on their site.