We’ve already seen Occulto, a magazine exploring the intersection of fine art and science, and now The Earth Issue is centring on the meeting point of fine art environmentalism. Based in London and Montreal, it is filled with the type of breathtaking photography and informative writing you’d expect from artists who pay reverence to nature as a response to climate change.

We ask founder and environmental photographer Elena Cremona to talk us through some of the artists featured in the magazine, which is a collaborative project between The Archive Collective Mag and herself.

Elena: Jim’s ‘Glyphs’ are derived from photographs he took of the beautifully intricate chewing patterns of bark beetles. The destructive chewing habits of these beetles pose a steadily increasing threat to forests, especially as winters become warmer and summers longer, providing an ideal climate for them to survive. I admire how Jim uses his artistic practice to investigate topics at the frontier of nature, reimagining ways in which to engage people with the natural world in a visual manner. Jim is an Atlanta native with an MFA in photography from Georgia State University. He is the founding President of Nexus, which is also now known as the Atlanta Contemporary Art Centre.

Elena: Vilde’s series ‘Plastic Bag Landscapes’ investigates the human relationship with consumer culture by visually representing the issue. Vilde collects discarded plastic bags and transforms them into majestic landscapes through still life photography, addressing the detrimental effects of plastic waste on our land and oceans. Although her images celebrate abstract beauty, Vilde hopes her work will also remind viewers to look more closely at their own consumption patterns. She is a Norwegian artist currently based in Oslo, with a degree from Kingston University in London.

Elena: Nora uses analogue photography and darkroom printmaking to create her images. I can personally relate to her deep connection to nature, which she passionately communicates in her work. She embraces her role as Mother Earth by inviting the viewer to share her spiritual awakening through raw and eclectic images, showcasing nature’s many facets. She is based in California and has two art degrees from the University of California, Berkeley.

Elena: Alba Giertz is a Stockholm-based artist whose work is deeply related to her own journey through the storms of life, acting as a tool for emotional release and a means of finding substance in a world that can seem empty and vapid. Creativity can act as a channel to ventilate morbid thoughts. For Alba, the relationship between art and emotion has been symbiotic; through sharp observations she unchains transient feelings from time, skilfully mixing enigma with precise realism. I particularly love the way Alba emphasises her imagery with original writing, walking the line between being shy and loud; clear yet ceaselessly filled with passionate mystery.

Elena: Ram is an independent artist born and raised on the south coast of England. He has a background in textiles and fashion design and is driven by a lifelong passion for art. Trusting his own fascinations, obsessions and compulsions, Ram creates large-scale artworks filled with movement and colour, unleashing the innermost energies of life itself.

Using his own observations of the natural world, he seeks to influence our understanding of the intersection between art and the environment by turning the innate truths of his surroundings and experiences into physical creations. Ram’s enigmatic and ethereal paintings pay testament to his role as a ‘passenger in the process of life’, taking me on a journey of lucid transformation and act as a tool to contemplate my own emotional consciousness.

We send out a different independent magazine to subscribers each month – Try it out from £20! 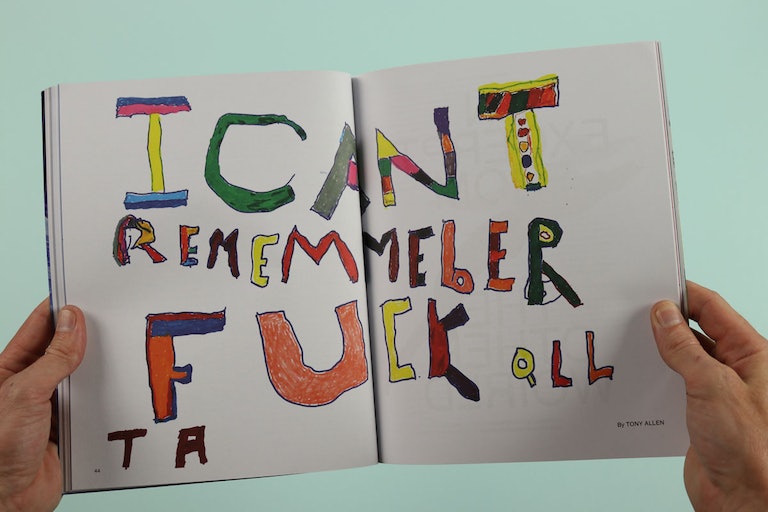 "It’s not about brain injury, it’s how you can express your character despite the bad things that have happened to you"