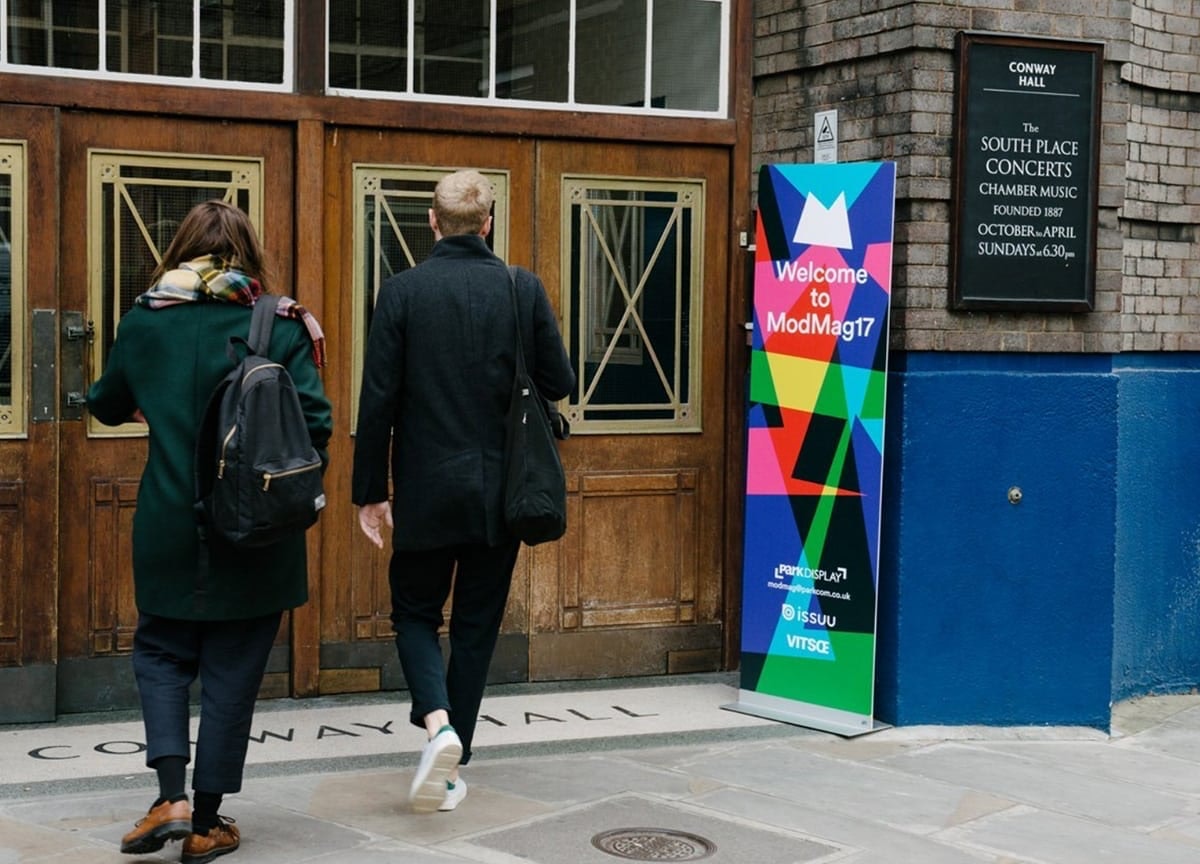 On the stage of Conway Hall, host Liv Siddall began yesterday’s Modern Magazine conference confessing that she was a little nervous. Returning for its fifth year, magCulture’s annual publishing event saw more attendees at an even bigger venue. But then, Liv remembered that she was in a room full of people who love magazines.

Jeremy Leslie, founder of magCulture, had welcomed the crowd just a few minutes earlier by expressing a similar sentiment, saying that the event was a “celebration of magazines of all types”, despite the difficult situation the industry is in. And this feeling of a thriving community, sustained less by finance than by mutual love (or obsession) for the printed matter, threaded together the day of talks. Here are our highlights from some of the most exciting magazines in the world today, like The New Yorker and Popeye magazine, and you can also see magCulture’s live coverage of the day by Jacob Charles Wilson.

Takahiro Kinoshita (above), editor-in-chief of lifestyle and fashion magazine Popeye, opened his talk by illustrating the saturated state of publishing in Japan today. From six almost identical magazines about sumo wrestling, to women’s magazines “precisely divided” into very specific age groups (and even titles about water dams and pigeons,) he believed that the industry is declining due to a lack of interesting magazines that can “capture people’s hearts”.

This fuelled his mission to redesign Popeye, founded in the 70s, but which had become a “normal fashion magazine” in the early 2000s due to pressures from advertisers. He wanted to redirect the editorial focus back to things the “kids were crazy about”, back to the densely researched stories the magazine was known for, and closer to its original source of inspiration, The Whole Earth Catalog. Highlights from his favourite issues included one that looked at the phenomenon of good curry houses in Japan that always seemed to be next to good bookstores.

Similarly frustrated by mainstream publications of a particular genre, Anja Aronowsky Cronberg (above) created Vestoj as a way to reflect on fashion critically. Wary of the uneven power dynamic, she made the decision to resist advertising. Blending academia and fashion, Vestoj examined all aspects of society’s relationship with its garments, from stories on dry cleaners to the way mental health patients recovered by gaining agency in making sartorial decisions.

There were a couple of announcements by magCulture — a podcast collaboration with WeTransfer called What About?, which looks at how specific stories in magazines are created, with voice actors reading out the articles. And The Story of The Face by Paul Gorman is also launching on November 16, which will see a special event at Central St Martins.

We heard from Tony Brook (above) of Unit Editions, who spoke about the importance of self-initiated projects — “Build it and they will come” — and James Hyman of the Hyman Archive showcased the physical manifestation of that ethos. His 150,000 (!!) strong magazine collection is the biggest in the world, supplying organisations like the V&A with vintage print from across the decades.

Being willingly buried in creativity is perhaps a familiar feeling for those who work at design website It’s Nice That. Editor Owen Pritchard (above) spoke about the large volume — 1,000 a week — of entries they receive, which they narrow down to around 2,500 online “stories” a year (“No one’s ever given a bedtime content — they’re stories”). Twice a year, they publish Printed Pages magazine as a distillation of the site.

Interestingly, because their readership is 99% online, the editorial direction for the magazine is shaped by internal discussion as well as online popularity and feedback from social media. The magazine also features writing that has been tried and tested online, and retains the same ethos of approachable, positive and affirmative reporting of design. Still, while the digital shouts “loudly and daily”, the print magazine provides a calmer reflection.

Lydia Garnett, one half of Accent magazine, also shared her experience of first publishing content online, before putting it into print. And for the digital revolutionists asking why a website wouldn’t suffice, Migrant Journal’s Isabel Seiffert (above) and Justinien Tribillon had a great answer: print ages better than digital. (If you’ve seen websites circa 1990, you’ll know what they mean.) From textured covers to micro-embossed pages and metallic ink, their magazine is an utterly tactile experience. The pair spoke about using design as “an alternative point of entry” for readers of their magazine exploring the sweeping issue of migration.

But can magazines really change perceptions? Asked by Jeremy in a panel discussion (above), Bertie Brandes and Char Roberts of Mushpit magazine responded that their satirical magazine always wanted to be radical and political, “otherwise it would be boring.” Matt Phare of Shortlist and Stylist spoke about always wanting to do things he’s a bit scared to do, and Paul Gorman of The Face reiterated a sentiment from Takahiro earlier, of injecting sharp ideas into the mainstream. John L. Walters of Eye magazine also touched on the increased accessibility to self-printing and publishing today, and urged young writers to get in touch and contribute to Eye.

Liv spoke candidly on making Rough Trade magazine (which you can read more about); Francesco Franchi, managing editor of Italian daily Il Repubblica took us through the clever uses of illustration and typography for their supplement, while Mirko Borsche spoke about the power of subtle design changes in his work for Die Zeit and Zeitmagazin.

Lastly, Nicholas Blechman (above), art director of The New Yorker, took everyone on a virtual tour of their offices on the 38th floor of One World Trade Centre. In the magazine’s iconic line drawings, he guided us from the mailroom through to editor David Remnick’s office space. Nicholas spoke about working creatively with the magazine’s formatting restrictions — three text columns, three fonts (Urban, Neutra and Caslon), two colours (black and red), and their unique rules for syntax (“coöperation”). Subtle iterations to the cityscape masthead for the ‘Goings On About Town’ section, and hand drawn typefaces are some ways he works with a magazine “caught between the future and the past.”

We learned about their severely scrupulous Fact Checking department, where an illustration of Chester Arthur’s swearing in saw back-and-forth about whether his beard was to be connected to his sideburns. Nicholas lamented the current administration — a bunch of old white guys who were “extremely dull to draw” — and closed by saying that he was proud to be working for a magazine that “fights the good fight”.

All photos by Owen Richards

Stay up to date with the best, new independent magazines — Sign up to Stack from £7/month 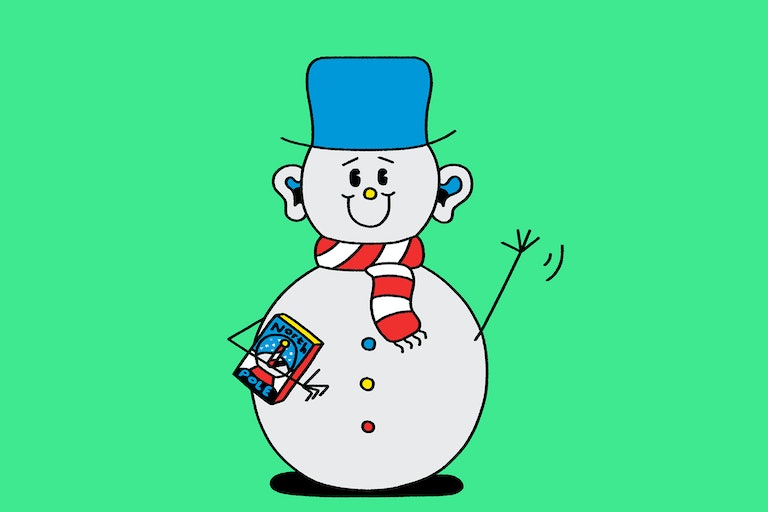